Of all the mobile phones I have owned so far, the best has been my old Nokia. It was tough, easy to use and had a long battery life. I was seduced by all the whistles on the SonyEricsson phone but after one year of use, I have to say that I will never buy a Sony Ericsson phone again. They are rubbish. The next phone I own will definitely be a Nokia. Anyway, earlier this year Nokia launched the 16GB version of the X6. I don't use my mobile phone to listen to music and so I really don't have a need for their 32GB version. 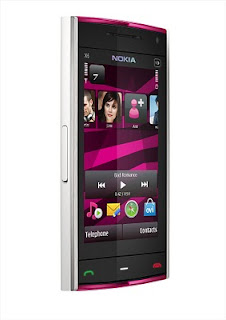 Running the latest version of Symbian, the phone is aid to have up to 18 days standby time and 11.5 hours talktime (GSM). You will agree that's pretty amazing. For me, a phone should have a great camera and the X6 boasts of a 5 Mega Pixel Camera with Carl Zeiss lens. It has a large 3.2”Capacitive Touch Screen and comes with HSDPA, GPS and WLAN. The phone is also compatible with the Ovi Maps.

You have a choice of 4 finishes: all black, all white, white with pink highlights (see the picture) and white with yellow highlights.

Those in the US can get the Nokia X6 Unlocked from the Amazon store for $399.99.
Email Post
Labels: nokia

Unknown said…
Hey adam, I agree with you on Ericsson phones! I think Nokia produces better quality stuff!
12:30 am, March 20, 2010

Computer Ram Upgrades said…
It is as good choice compared to its its predecessor in terms of price and memory capacity. It looks reasonably better version then others available in this range.
6:09 am, April 13, 2010

Net Age Internet Marketing said…
I've owned several Nokias and loved them all. I have only ever had one Ericsson and subsequently I have vowed never to buy one again (the same goes for Motorola, just for the record's sake)

Nokia's products are really robust and versatile, with after sales service of note, on the rare off-chance that something actually goes wrong with one of their handsets.
1:01 pm, June 22, 2010