I have been playing Knighthood, a strategy game on Facebook for a while. Read my previous post about being addicted to the game here. I decided to lay low for a while to lick my wounds and build up my defences. Lost a couple of my vassals to more powerful opponents the last time I was in the war mode.

I recently moved up to Viscount, thanks to Count Zaid, my leige. However, yesterday I found out that another player, Count Odd had seized me from Count Ziad and became my new liege. On the request of Zaid I went into war mode and rebelled against Odd but was not successful. I noticed that my profile is now in the "Realm" and was quite happy to find out that I am the #3 player in the University of Warwick. 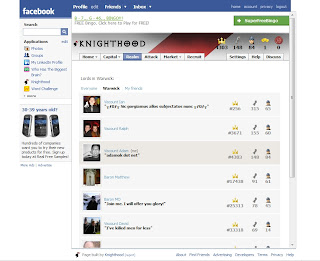 If you have no idea what I am talking about, you are obviously not familiar with the game. Maybe you should join my army.
Email Post
Labels: facebook games

i would like my website www.fyroo.ocm to be review by your blog. how much does it cost?

Dilip Mutum said…
I would be happy to review your site. Please contact me directly at ahoklah@gmail.com for the rates.
10:29 pm, June 16, 2008