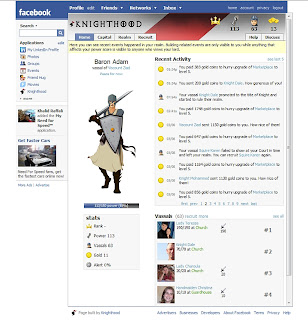 Sometime back I was invited to join KnightHood, one of the hundreds of applications on Facebook by one of my friends. I signed up for the online multi-player game but it seemed a little to complex and I promptly forgot about it.

Quite recently, another friend was telling me about this "amazing strategy game on Facebook" and that's how I rediscovered the game. And after doing some research, quickly got into the thick of it.

You start out the game as a Squire and then move up to become a Knight (or Lady), then a Baron (or Baroness), a Viscount (or Viscountess) and so on. So far the highest ranked player is a Duchess Marina . To get started, you recruit your friends as your vassals. You then go ahead building, expanding and upgrading new buildings including Castles, Marketplace and Walls among others.

Building a Marketplace will being generating gold, which can then be used to hasten the construction and upgrade of other buildings including your defences, namely, Wall, Watchtowers and Pallisade.

Building Barracks allows you to raid other players and steal their vassals. I made some mistakes in the past such as expanding my Barracks too fast without building up strong defences. This brought me into the attack bracket of some very aggressive players and ended up losing several of my Vassals. I later learnt that it is advisable to build up very strong defences (at least 2 levels above your Barracks) before expanding and upgrading the Barracks

I was released by my leige who said that I was pushing up his attack bracket and I thus became a "Sovereign". I was loosing too many Vassals and decided to disband my troops and went into peace mode (no one can attack me in this mode nor can I attack anyone else while I build up my defences.

There were some interesting offers on the discussion boards. One guy was offering 10000 gold per week or 1000 gold everyday to join him as a vassal with the freedom to be released any time. This sounded good with me and I became his Vassal.

I will be gathering back my armies as soon as I finish building the dreaded Trapper. Don't be surprised if you find the servers down once in a while. The game is still in Beta.

Yeah! I am really into this game.

Dilip Mutum said…
I suggest you go through the FAQs before you start playing otherwise all the bad guys are going to loot and steal away all your vassals.
6:43 pm, March 18, 2008