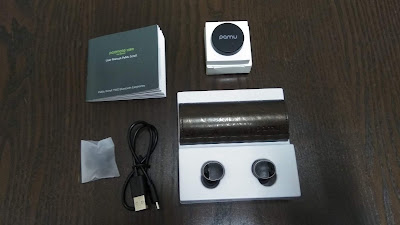 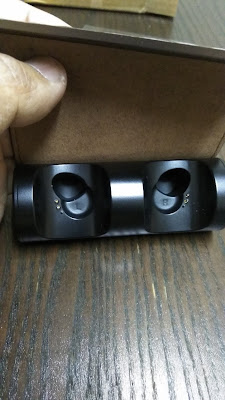 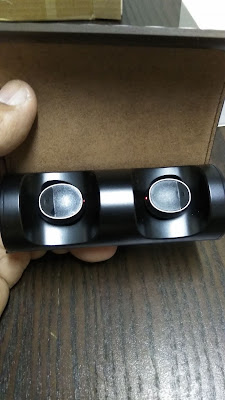 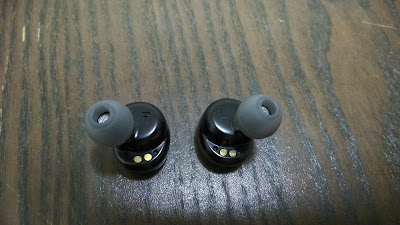 There are so many bluetooth earphones in the market and you might be wondering what makes the PaMu Scroll different from the competition. Well, it has several features which makes it stand out from the crowd.

First of all, it is Bluetooth 5.0 with auto pairing, and as mentioned before, with wireless charging, which you can use with a standard Qi wireless charge pad to charge.

Easy pairing - blue lights on the phones indicate that they are paired with your mobile device. 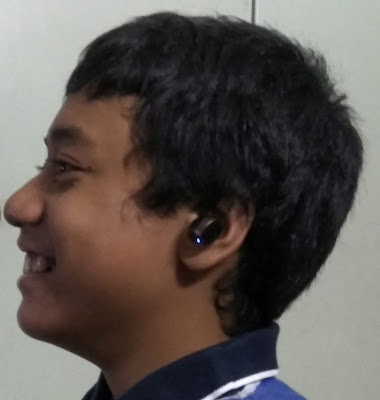 My son loving the earphones. He has got them on wrong - the led lights should be on the top with the mic down but it does not really affect the performance in any way.


Well, you might argue that these features are now common in so many others as well. Well, other special features include call audio in both ears, as opposed to only one in most bluetooth earphones, touch control and my favourite - it is water resistant (IPX6). Which means that you do not have to worry if you get caught in the rain with the earphones on. I am a bit sceptical about claims manufacturers make and this was one of the first things I tested - to see if the earphones were indeed water resistant. So I put it under my shower for about a minute - put it in my ear and it works.

Also most bluetooth earphones will have an extended arm with the mic near your mouth and I was a bit concerned about the quality of communication. I was pleasantly surprised when I found that the person on the other line could hear me perfectly. Their manual reminds you to wear the earphones with the mic downwards but I did not make any difference in the performance or sound quality if the mics are up as well.

The review earphones came charged and again as I wanted to test out the claims that had a playtime of 3.5 hours. I was quite surprised that the playtime actually lasted slightly more than 3.5 hours on a full charge. Not as much as the 5 hours on the Apple Airpods but much better than other bluetooth earphones in the market.

However, all these features mean nothing if the sound quality is not good, and again I was pleasantly surprised as it was in fact amazing. The bass was really good without any distortion, even when playing  Led Zepplin's Kashmir.

I am not too found of my bluetooth earphones because they are quite heavy and uncomfortable and only on one ear. I only put them on when I need to take a call while driving and I often forget to bring them along. However, the PaMu scroll is really comfortable and fits perfectly in my ear. It is quite light as well at just 5gms, 1.5gms lighter than the PaMu 0.1 earbuds.

About the touch control, which is again one of the unique features of the Pamu Scroll each phone has specific controls. The user manual mentions 'Click' and I was expecting a button but actually all you have to do is tap. While listening to music, you just tap it once to play or pause (on either ear) and tap twice to go forward to the next track (on left ear). To answer calls, you tap once and tap twice to reject a call (on both ear). Also double tap to activate Siri or Google assistant (on Android phones). Had to practise a bit to get used to the tapping controls.

Another thing that sets the phones apart is of course the fantastic looking leather scroll charging/ carry case (and hence I guess the name) which can be a great conversation starter. I have had so many people admiring the case more than the earphones. They have four colours/ designs, namely, Rock 'n' Roll, Graphene, Glory Edition and Sakura (Pink) and I received the Rock 'n' Roll, design which has a dark brown shade. I think they got it wrong on their box as it says Graphene.

After using the earphones for about two weeks now, I would definitely recommend these earphones - they look great, are comfortable with fantastic sound quality and several unique features as highlighted above.

The earphones are now only US $39 on Indegogo with free shipping for the super early birds. There are only 415 pairs left when I last checked so hurry. Here is the link to their Indegogo page: https://www.indiegogo.com/projects/pamu-scroll-bt-5-0-earphones-with-wireless-charge#/