Samsung Galaxy S6: Is this the Samsung phone we have been waiting for

When it comes to mobile phones, I have been a loyal Samsung fan. I was converted after I bought a Samsung Galaxy S2 several years back. It was an impressive mobile phone and I am still using it. Since then, I have owned the Galaxy S3 and the Galaxy Note 1. However, my loyalty has kind of slowly faded. Even my wife who used to be a loyal Samung fan has moved on to Lenovo. Samsung keeps on bringing out unimpressive mobile phone models, one after the one,  which are not attractive nor innovative and yet, not cheap either. I can understand why hundreds (if not thousands) of people can wait in queue whenever a new Apple iPhone comes out.

I was seriously tempted to jump ship and get myself a new iPhone after trying out my sister's iPhone 6. However, the ridiculous price of the phone kept me check. The phone I was seriously considering was the Sony Xperia Z3. Two factors convinced me - the picture quality and the fact that it is waterproof.

A few days back I learnt that Samsung was launching their new phone which has been covered by a few tech blogs. There was none of the anticipation or excitement that accompanies an iPhone launch. However, Samsung may have finally done something right. 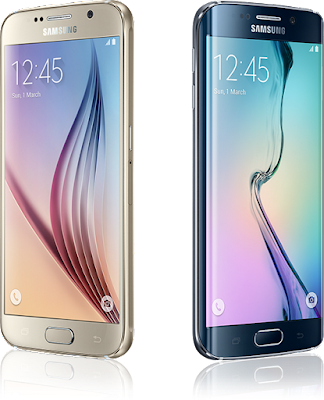 I guess Samsung has finally listed and there is no trace of plastic (at least not on the surface) on the phones. They are aluminium and Gorilla glass wrapped. The only difference between the two models is that the S6 Edge's screen extens along the edges on both sides which can be turned into informations strips similar to last year’s Galaxy Note Edge. The phones have 5.1 inch, 2560x1440 displays and is powered by Samsung Exynos processor (2.5GHz quad + 2.1GHz quad) with 3GB of RAM. The phone runs on the latest Android 5.0 Lollipop OS.

It has a 16-megapixel camera with the lens protuding from the back which somewhat spoils the design but I guess it is one of the technical issues you face when you want to place a high pixel camera in a thin phone (just 6.8mm thick). It also has a 5MP front camera with real-time high definition recording.

On the negative side, some features have been lost. This includes lack of a MicroSD card slot and the 2550mAh batteries which can't be replaced.

Not sure I am convinced though. Have to try it out hands on and look at the prices. Then I can finally decide.