The Timex Ironman Triathlon digital wristwatch has come a long way since it was first released in 1986. I have had mine which is in fluorescent Green (T5K434SU) for nearly 2 years now. I was initially looking for a Casio G Shock but when I came across this fantastic deal on Amazon UK - only £17.50 including postage and VAT (normal price is around £55), the decision was made and it has become my favourite watch.

It was an amazing deal for a shock proof that can really take the punishment, waterproof upto 200m, dual time, 100-Hour Chronograph with Lap and Split Times, 30-Lap Memory Recall, 99-Lap Counter and of course the great Indiglo lights. 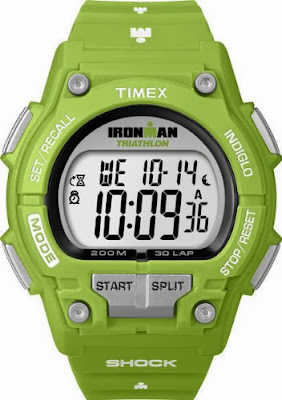 However, recently the battery died. Then my son went and cut off the strap. I went to some of the watch shops around town and asked them how much it would cost me to get a pair of new straps and get new batteries - I was shocked when I found out that I would have to spend around £40. It would actually be cheaper to get a brand new Ironman Triathlon similar to mine.

I do not know why I did not think about it before, but it dawned on me one day, that I could probably fix it myself and much cheaper than at the shops. Thankfully I had not thrown it away.

Unfortunately, I could not find the green straps anywhere on the net and finally settled on original black straps from the WatchBattery (UK) Ltd site. They cost me £ 15.49 including delivery. It never occurred to me to contact Timex directly. Anyway, the batteries -  2 DURACELL Lithium CR2016, cost me only £1.45 including delivery. The repair cost me a total of £16.94 - slightly less than the original cost of the watch.

I was initially a bit worried about the black straps and the green case but it worked out quite well.

Changing the battery was quite straightforward. Had to remove 4 outer screws and one for the battery latch. It is good practise to change the rubber gasket as well but I left the original one in after cleaning it and brushing the debris. I did not pressure test the watch for water proofing as I did not have the tools but I did test it by wearing it in the bath and there were no leaks - you normally see condensation forming on the inner glass crystal of the watch if there are leaks.

Here are some pics: 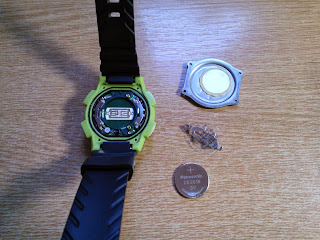 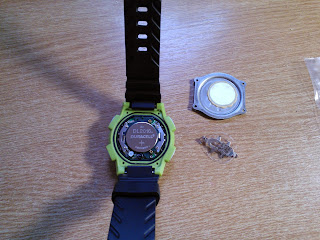 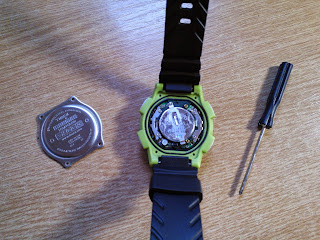 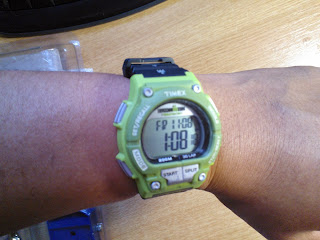