My contract with the 3 network ended yesterday. I have been a loyal customer for more than 2 years now ever since I first trialled the 3 Skypephone and had been looking forward to getting a new smart phone.

A few weeks back, I received a call from one of their salespeople who tired to get me sign up for a new contract with a refurbished phone for 2 years. I might have been interested had the models on offer been new ones or if they had been cheaper. However, I realised that I could get newer models at the same price and I rejected his offer.

I was really excited when I visited their website and saw that they were offering the Nokia X6 on the Internet Talker 100 plan for just £14 pm. Both my wife and I have decided to reduce our expenses on mobile phones and we had set the limit of just £15 pm. I had been paying around £19 per month before this.

However, I found out that I could not automatically upgrade online. So I called up their customer service. Imagine my shock when I found out that the online offers were only for new customers. Old customers would have to pay the normal store prices, for example £16 for the Nokia X6 on the Internet Talker 100 plan. I could take advantage of their very attractive online offer (which runs till the end of this month) but it would mean losing my mobile number which would be a big hassle.

I had hoped that as a loyal customer I would be eligible for a discount or something. I had introduced so many of my friends and family members to the 3 network as well but apparently loyalty counts for nothing on the 3 network.

I talked to a number of their customer service people but they were simply not willing to compromise. In the end, I was so annoyed with them that I decided to change network and even took the PAC code.

Today I am almost ashamed to say that I had to swallow my pride and went back to them. I renewed my contract in their store in Coventry city centre today.

I have to admit, 3 has the best deals for mobile phones among all the providers in the UK. Even at £16 for the X6, they are still the cheapest. The free Skpye and Twitter is an added attraction. However, the biggest reason I had to go back to them was due to the fact that my wife had renewed her contract with them yesterday. I could still go but that would mean extra expenditure to call each other across networks. This is what my wife refers to as switching costs. It doesn't mean that I am satisfied with their service or loyalty but simply that the cost of moving is too high. So I didn't get any reduction in my rates, no gifts, no rewards, nothing for being a loyal customer.

So here is my new phone: The Samsung Galaxy Portal GT-I5700. I got it for £14 pm month on the Internet talker 100 plan. This is my first ever Samsung phone and I am hoping that I won't be disappointed with this phone. 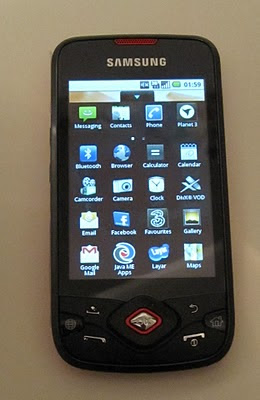