First impressions of the Nokia E72

Finally got down to writing a long over due review. I first blogged about the Nokia E72 in June last year and was able to try out the mobile for two weeks, thanks to WOMWorld/Nokia. 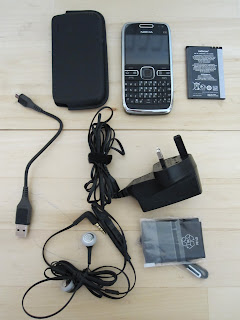 At first glance it looks identical to the E71 however, the E72 is slightly wider (by 4mm) but it is thinner than most Blackberries (and lighter). It also has a faster processor and several new features including the optical Navi Key - makes scrolling pages much easier as compared to the knob on the E71.

This Symbian smartphone also comes with Ovi Maps which means that you can ditch the sat-nav and use the voice-guided navigation on the phone. Though not as user friendly as my old Tomtom One, it can prove to be quite useful and I used it to find my way to our polling station in the recently concluded elections.

I got so used to the Qwerty keypad that it was quite hard to go back to typing on my old phone. It paired comfortably with the Nokia HF-510 speakerphone via bluetooth and the voice calling feature was amazing. And talking about connectivity, I had great signals throughout the trial wherever I went. So I guess I was wrong in blaming the 3 network, the fault was actually with our Sony-Ericsson phones. Connecting to the wifi network in our University was quite easy as well and with great internet speeds.

The only thing that disappointed me was the camera. The E72 boasts of a 5 megapixel camera with auto focus and flash. Maybe I was expecting too much but the results were not as good as I had expected. I felt that my SonyEricssson K770i gave better results. Indoor shots came out with a yellow tinge and there was a lot of noise even when taken in bright sunlight. 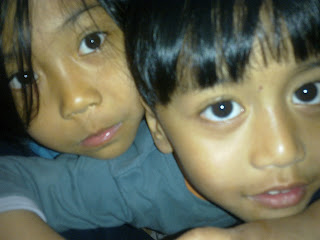 Indoor pic of my kids 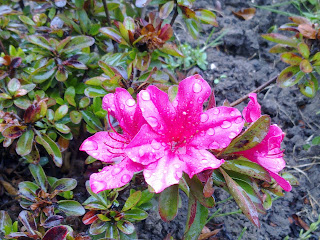 The video quality was acceptable.

Making video calls was easy and my friends told me that the image and voice quality was really good.

It is a small thing but the leather case that came along with the phone does make the phone feel a bit classy while carrying out it's main function - that of protecting the phone. However, one particular feature that makes this phone really stand out was it's battery life. The phone was already charged when I received it and I didn't even need to recharge it in the 2 weeks I had the phone. Found out that it has up to 12.5 hours talktime and up to 24 days standby time.

The 2 weeks duration was too short to test out all the features - a shame really because the phone is targeted at business users and I didn't really have time to set up the Nokia Messaging service which allows you to access up to 10 personal email accounts with 1 GB of storage. Another great function that I didn't really get to try out as well was the Quickoffice, which allows you to view and even edit documents in Microsoft formats including Word, PowerPoint, etc.

In conclusion a great phone, especially for business users and people who want to have access to multiple email accounts on the go.
Email Post
Labels: nokia review

pozycjonowanie poznan said…
Yeah...it looks great. E72 makes quite good photos and videos; otherwise I like qwerty keybord...it's so comfortable
10:28 am, May 27, 2010

teo cyprus said…
This is my favourite phone. A piece of art. I use the phone for 2 years and i have no problems.
- fast camera
- quality photos
- sound quality very impressive
- easy to use
- stylish design
- advanced multimedia features
3:34 pm, March 17, 2011