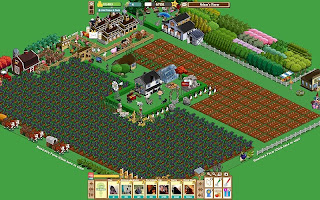 Games are the main reason that Facebook has become so popular and FarmVille is the most popular game on it by far. When I last checked it's Facebook page had 20,963,762 fans and mentions that it has 81,125,786 monthly active users.

Developed by Zynga, this Flash game allows you to build up your own virtual farm complete with crops, animals, buildings and even aliens cows. It is one of the several game applications I am playing on Facebook but of late, it is the only one I am most active on.

If you thought that online games were only for kids, you are totally wrong. Almost all my friends playing this game are in their 30s, most of them with kids and some in top managerial positions. My wife is hooked on it as well. I have just reached level 33 while top in the ladder is a lady friend who is on level 60. I know of a few of my friends who actually spent money to buy virtual stuff on this game - Yes! Real money.

I can only guess the reasons why this game is so popular. First of all, it may be due to the fact that FarmVille allows room for creativity and growth unlike other games on Facebook. You should see some of the amazing designs that some people have come up with.

Then there is the social networking part, you need to have friends and interact with in order to expand, to get gifts and experience.The game developers keep the interest up by coming up with limited edition decorations and gifts, mystery boxes, upgrades and special themes - for example, it's the 2010 Vancouver Winter Olympics now and Valentine's day theme a few days ago.

This could be a really interesting topic to research academically - the motivations, the virtual economy, etc. Too bad I am really busy with my own research on attitude towards blogs.

The Trenches of Parenting said…
Hi, My name is Carolyn and I am a FarmVille addict. I started 3 months ago and because of my addiction, I have sold my own home to afford my habit. I have lost the respect of my family and my children.

No, no - just kidding. But the game is really addicting once you get into it. I like the fact that you don't have to stay on top of it to make it work like some of the other games on Facebook. I like to call it my "simple fantasy life", LOL!
11:04 pm, February 21, 2010

Faith | MyPostcardPrinting.com said…
Haha. Now I know I am not alone. I am so addicted to Farmville. After work, when I get home, I'd open my laptop first and play Farmville before I take my shower, change my clothes and eat. After an hour or 2, I'll do my chores and everything and go back to Farmville. Am I that addict? Nah! LOL.
8:17 am, February 23, 2010