According to Angela Ahrendts, CEO of British Luxury brand Burberry, their online sales have exceeded sales in many of their flagship stores. 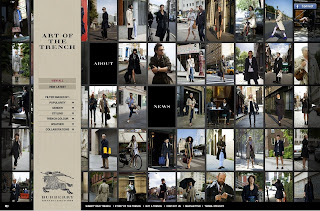 They have also recently launched a social networking site called 'The art of the Trench" which as the name suggests focusses on their iconic Trench coat. They hope to connect with potential new customers - namely the younger generation while maintaining the relationship with existing customers.  Faceboook users can send in pictures of people wearing trench coats. The best pics will then be added to the site.  Users can comment on and even vote for their favourite photographs.

They hooked up with fashion blogger Scott Schuman, also known as The Sartorialist who came up with the initial series of photographs.

Frace Olivares said…
Burberry is one of the most popular brand and there is nothing wrong it they make use of social media as their strategy to make them more popular.
5:54 pm, October 08, 2010