This a case study of the successful launch of Warwick blogs.

This is an amazing initiative and they are also encouraging staff to use it for e-learning purposes. However, I am not really sure how successful that has been as I am not aware of even one lecturer who blogs in the entire Warwick Business School.

Before the service was launched, they carried out focus group studies in February 2004. This was followed by usability studies to ensure that the system was easy to use. They used something called Paper prototype testing, whereby design sketches were used to develop a prototype and evaluated in March 2004. I feel that they got it right as the interface is really user friendly and setting up a blog only takes a couple of minutes. 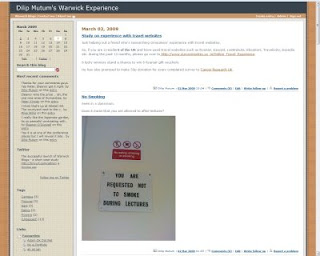 They finally launched the service accompanied with a publicity campaign using various formats ranging from posters to web banners.

When I last checked there were 5900 blogs with 119095 entries on topics ranging from principles of flight to the Ikea effect.
Email Post
Labels: blogging research review