Matt from 3mobilebuzz.com was kind enough to send me two 3 Skypephones. I will be testing them out for a month. The first box I opened had the white coloured phone, while the other one was black. 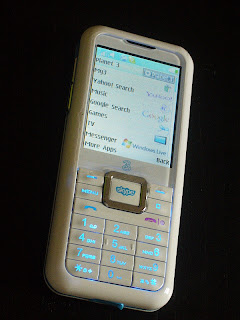 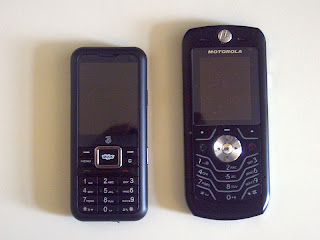 I don't know why but somehow, the black coloured phone looked a little cheap at first. It was probably due to the fact that I am presently using a sexy Motorola L6. The dimensions of the phone are 100x44 x13.6mm. It's smaller than my L6 in length but a little bit thicker. However, as they say, don't judge a book by it's cover. The Skypephone is loaded with amazing features found on much costlier phones.

Of course, there's the ability to make Skype calls to all my contacts all around the World and to receive calls from them as well. Then there is the 2 megapixel camera. It gives quite good shots - much better than those taken by my old L6. I will upload some samples later.

The phone also has a decent MP3 player and I was pleasantly surprised by the quality of the sound through the earphones that are supplied with the phones.

I also appreciate the fact that that they bundled a phone sync software so that I can download and upload stuff from my computer to the phones and vice-versa using a USB 2.0 cable. It's surprising but most phones don't come with a sync software bundled.

Passing it around to my friends - the phone received mostly good reviews except for one friend who pointed out that it didn't have any games installed, apart from two trials versions of Pac man and Tetris. I don't play games on my mobile so I am not particularly concerned with this particular feature. However, it might be a good idea to bundle in some games with the phones for people who do care - especially the younger generation.

The internet connection over the 3G network was really fast (for a mobile) and a search of my ah ok lah blog on Google took only a few seconds. I even posted a comment on my blog using the phone. I later learnt that the phone can be used as a modem to connect my laptop to the net. Look for the review in an upcoming post.

Overall, the 3 Skypephone is a great phone and I haven't found any flaws in it as yet. I am seriously considering using it with a "Pay as you go" account once the trial period is over.
Email Post
Labels: gadgets mobile review uk

Please do write once you learned on how the phone can be used as a modem to connect laptop to the net esp. if it is available on Pay As You Go. I bought a Nokia 6120 from Three as it has the cap. as well but is not available on pay as you go phone.
10:41 am, November 27, 2007