First it was General Motors who came out with their Hummer HT1car mobile phone in association with French company Modelabs. Now, you have the Porsche phone. 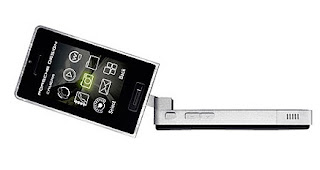 The Porsche Design Group and Sagem Communication (Safran Group) have come out with the first Porsche Design mobile phone, the P’9521. It was revealed at the Red Dot Design Museum in Essen, Germany.

The body of the phone is made from a solid block of aluminum with a mineral glass screen. The screen can be rotated 180° on a double hinge made from aluminum.

Special feature of the P’9521 is a fingerprint reader which will secure access to personal data. The technology comes from Sagem which has expertise in biometrics.

Other functions of the P’9521 include: 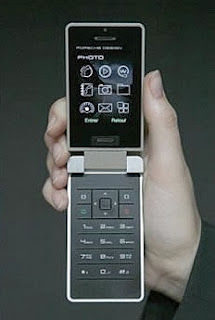 - Photo/video: It has an auto-focus video and still c3.2-megapixel camera with integrated flash and digital zoom.

- Music: It also has an MP3 player and three speakers (yes that's right, 3) for ringtones and voice playback in stereo quality sound.

The new phone will be available from later this year in Porsche Design Stores and specialist mobile-phone retailers worldwide. However, it will not be sold in the US, Japan or Korea.

I guess it won't be long before we hear about a Ferrari or a Mercedes phone too.

Anonymous said…
really neat phone...doesnt hang like my nokia n93 and interface is pretty stylish and simple....sometimes the fingerprint sensor doesnt work...but overall really nice phone 9/10....plus to me the photos come out better than n93
4:56 pm, February 11, 2009