Looks like one of my wishes has finally come true. Though it sounds impossible, Nokia has finally come out with Android powered phones. Don't get me wrong. I love my Nokia Lumia 900 and the Windows operating system. However, the fact that several popular apps including Instagram, Vine, etc are not available for the Lumia 900 has left me quite disappointed. As I have discovered, not having the Candy Crush Saga app can influence the choice of mobile phone for a number of people.

My contract runs out in a couple of months and I have been thinking of a suitable replacement. My budget is a maximum of £200 and
I have a few candidates in mind, namely the Nexus 5 and the Moto G. However, the new Nokia XL which is priced at €109 is a strong contender.

All three of the new phones are powered by a Qualcomm Snapdragon Dual Core processor and are Dual SIM. Several third-party apps comes preinstalled, including BBM, Plants vs. Zombies 2, Viber, Vine and Twitter.

Other extra features in all phones include HERE Maps with turn-by-turn navigation and offline maps are included, Nokia MixRadio, Microsoft OneDrive with 7GB of free storage space and Skype with a month’s free calls to international landlines in selected markets.

The Nokia X is the entry level phone, with 4-inch IPS LCD screen, 512MB RAM and a 3-megapixel camera.

The Nokia X+ has similar specs to the Nokia X but has 768MB RAM and a 4GB MicroSD card is included in the box. Both the Nokia X and Nokia X+ are available in green, black, white, yellow, cyan and red.

The Nokia XL has a 5-inch screen, 768MB RAM,MicroSD card. It has a 2-megapixel front-facing camera, as well as a 5-megapixel rear camera with autofocus and flash. It is available in green, black, white, yellow, cyan and orange. 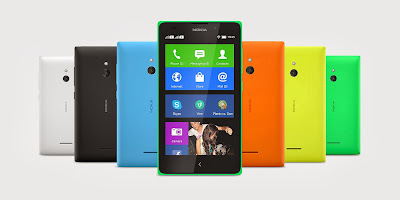