Camera phones vs an actual camera

Since our son accidentally dropped our Canon Ixus compact camera in the toilet bowl last year, we have been depending on our camera phones to record the various events in our lives - the places we have been to, the kids playing, partying with friends, etc. Increasingly I can also see that it also the same for most of our friends. Take a look at the interesting infograph detailing the evolution of the camera:

A recent article in The Wall Street Journal reports that classic compact or "point-and-shoot" digital cameras have fallen down 42% in the first 4 months of this year. However, this does not mean that people are taking less pictures.In fact take a look at the following infographic:

As the WSJ article notes, "number of photos being snapped is soaring exponentially".

However, despite the convenience of my camera phones, there are times when I wish I had a good camera instead. Only recently, we went to the Throckmorton airshow. We took a lot of pictures but apart from the closeups, a number of the pictures turned out quite disappointing - especially those of the various aircraft doing the aerial acrobatics.

The pictures taken by the camera phone are quite good for blogs and sharing on Facebook and Instagram but certainly not for printing. We realised this when we had one of our portraits taken via our camera phone blown up and printed on canvas.

Right now I am on the look out for a good bridge camera - something between a compact and the big SLRs. Check out the infograph below: 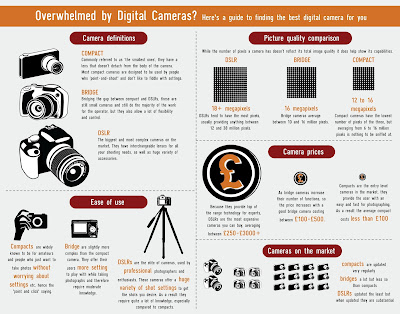 I may be a bit biased but I think the  Panasonic Lumix cameras are the best. I have had a soft spot for them since my wife bought me a Panasonic Lumix DMC-FX9 compact for my birthday in 2006. It is still working apart from the rear LCD screen which has not been working since I dropped it about 2 years back. However, the results were much better than even the newer, higher pixel Kodak and the Canon cameras which replaced it. And I guess I am right. Which!, the independent product testing and consumer rights group, has listed 3 Panasonic Lumix bridge cameras in their top 'Bridge Camera: Best Buys'. I am right now seriously considering the affordably priced Panasonic Lumix DMC-FZ62, which received a respectable 78% score and came 2nd. 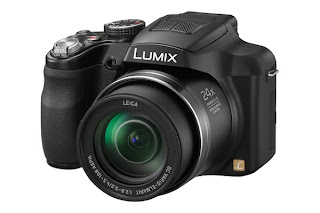 It has a 24x Optical Zoom Lens with 16.1-megapixel High Sensitivity MOS Sensor and apparently is great for taking pictures in low light conditions. Best of all, it is available for as low as £199.99 in one online store as compared to the normal price of £295.99. Now have to convince my Missus that this is a good investment.