Has anyone ever owned an instant camera before?

Like a lot of other people, I am a convert from old fashioned SLRs to digital cameras - have been for about a decade now, however, I have always wanted to own one simple instant camera just for fun. Luckily for me, my friends had generously given me one as a gift this year, which was lost and found again during a house spring cleaning.

The instant camera which is my latest addition to my collection of cameras, is a Fujifilm Instax Mini 7s Camera. I think it is quite a cool looking gadget and gives some very artistic shots (the ones you see on Instgram). 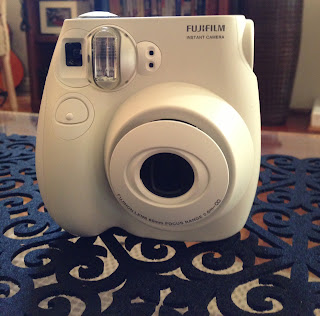 The Fujifilm Instax Mini 7 Camera is not new and has been in the market for some time. As all instant cameras, the specs are pretty simple. There are four main settings to use, indoor – dark, cloudy – shady, fine and clear for sunny days. To switch on, the lenses are pulled outwards and switched off by just pushing the lens in. The Photographing distance for the lens is 60 cm to infinity (about 2 feet to infinity). The best distance to cover for about three to four people would be about 2 meters/ 6 feet away and by positioning it horizontally although a meter is quite sufficient for taking a self-portrait or just another subject. The longer you have used the camera the better it gets, so say about 2-3 entire instant films later. The camera is quite affordable and is about AUD$80-90, which is quite reasonable. The instant film for the camera was bought separately and contains 10 sheets so after the first few practice shots I had to get another extra films. This camera uses only Fuji Film Instax mini instant films and it cost about AUD $10-15 which is better than developing a whole lot of pictures for AUD$20 or even higher from a shop. 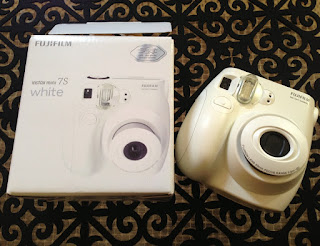 The camera is customised to use only colour Fuji film instax films and the picture size is just 62 x 46 mm (Picture Above). At the back of the camera, there is a small indicator of how many sheets are left. The camera is powered by 4 x AA size 1.5V alkaline batteries and this adds to the weight of the camera. I have to say the camera looks quite bulky with a dimension of 119.5x121.5x70.5mm and weighs just about 320g but the weight is quite negligible. The shutter button is quite wide and surprisingly at the front of the camera. As being a creature of habit, I always try to click it from the top.

I had tried out several shots outside with some friends and a flash is fired at every shot, even in broad sunny daylight and as long as there are no reflective backgrounds it was fine. The results were a bit blurry at both daytime and night however the night shots with the blurry effect gave a very different look to the picture. When there are two or more people in the shot, it is advisable that they stand or sit very close to each other and leave some space on both sides of the frame. In one of my earlier experience, there were some people missing on either side even though I could see them in the peep hole. I did like the results at night. I have posted a shot with a wall paper decal chandelier below. The picture was taken inside my house with poor lighting at night and it does lack some of the colours but I love the effect. 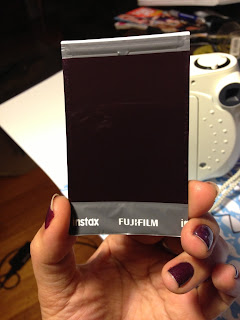 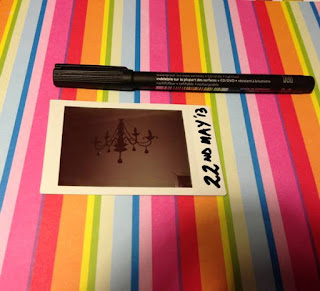 Bulky - It only takes 10 instant photos at one time, the peep hole is pretty small, Shutter button in the front and not at the top which is not ergonomic (well the whole design of the camera should be changed then!), 4 x AA batteries used compared to the one rechargeable battery for my DSLR that lasts for couple of weeks if 100 pictures are taken on a day. The instant films are a tad small and would have loved it in a bigger size.

The photos taken are refreshing and bring me back to my childhood. It does take some surprisingly artistic pictures, sometime not intentionally. It is a walking fun photo booth that I can just magnetise the physical picture and stick it to my Fridge. It is also a fun conversation starter with a stranger! (Not that it is for everyone).

The cons outweighs the pros and the pros are subjective, however just my two cents worth. Personally, I love this camera because I can get physical pictures and pass it on as a memento without visiting a photo shop. For some who have been using digital cameras, it can be quite annoying when the film ends at 10 shots. Phone apps like Instagram and Twitter does the trick of sharing photos and comments almost instantly as well. I guess it is definitely not for everyone but what I can say is that I have a soft spot for ogling at new but old gadgets! For those serious photographers, a word of caution, this is a camera just for fun! If anyone has come across or has owned one, do share the experience.

NB: All photos except for the chandelier photo have been taken by an iPhone 5 camera.

Diana has recently joined Adamok.net as a contributor and co-editor. Until recently, she was working as the tech business analyst with one of the biggest telecommunications companies in Australia. This is her first post here.
Diana also blogs at Pegasus2u
Email Post
Labels: camera review