Today a friend wanted some advice on choosing a tablet. The main purpose would just be surfing the net. Her budget was around £200 which puts the iPad out of the equation. So I suggested an Android powered tablet would be ideal as there are a few in that price range. Of course the first tablet to come to my mind was the Google Nexus 7. Another option was the Galaxy Tab2 7.0 Wifi 8GB (£199.99).

While doing some research, I realised that I had not blogged about the new Samsung Galaxy Note 10.1. This tablet which runs on the Android 4.0 Ice Cream Sandwich OS, features a 10.1" crystal clear screen (compared to 9.7" on the iPad) and is powered by a 1.4GHz Exynos Quad-Core Processor. However, what makes this tablet unique is it's S Pen stylus with intuitive input. You can take notes or draw in S Note, or use Adobe® Photoshop Touch (which comes pre-installed) to touch up your images. If you a mathematician you will love the Galaxy Note 10.1. Hand written formulas will be cleaned up in an instant via Formula Match. 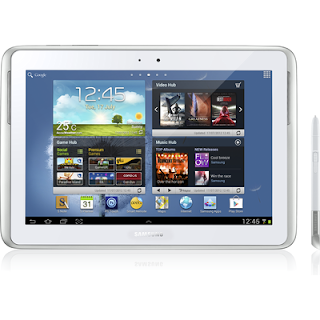 The Galaxy Note 10.1 comes with 2 cameras: in the rear is a 5 Megapixel Auto Focus Camera with flash and a 1.9 Megapixel camera in the front.

Another great feature is the ability to split the screen into two, so you can multitask. Browse a site on one page and take notes on the other side.

With the Easy Phone Sync you can still use iTunes to manage music, videos and podcasts, then sync to your Galaxy Note 10.1. They are also offering WIRED magazine's Note Edition allows for FREE until January 2013. For those who like playing games on their tablet, there a few games you can play with the S pen. Sonic The Hedgehog 4: Episode 2 and Need For Speed: Hot Pursuit is available for FREE for a limited time exclusively for all customers of this new tablet, (download from Samsung Apps).