Like a lot of girls her age, my daughter used to love Barbie dolls. However, she seems to have lost interest in playing with them and I can think of a possible reason - Barbie branded electronic toys.

The first Brabie branded electronic toy I bought her were a pair of pink Barbie Walkie talkies. She was really excited and she enjoyed playing with it You had to imagine what the other person was saying as you could hardly hear them over the static and I guess the novelty wore off and it ened up among the old pile of toys.

However, what really made her angry was a Barbie camera which I bought for her last birthday. She choose it from the Argos catalogue and it was not cheap - it cost around £30 and was bright pink (what else). She was happily taking pictures of everybody, her cake and presents.

Imagine her disgust when we downloaded the images next day and found out that the pictures were really awful. The resolution of the camera was really bad and pictures were dark and grainy. She was really disappointed and told me that she didn't want to buy any Barbie products ever again. 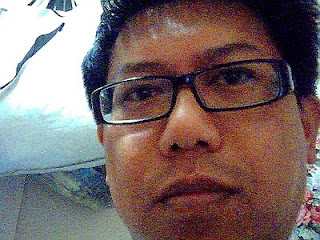 One of the better images taken - a close up of my face by my daughter.

My advice: stay away from Barbie branded electronic toys - just a waste of money. And I have nothing to say to toy makers who think kids are stupid.
Email Post
Labels: rant review toys