I have been trying out the Nokia HF-510 speakerphone for a little more than a week now. This device is a hands-free car kit for your blue tooth enabled mobile phone. A perfect replacement for my old hands-free headset. I never really got used to having something stuck on my ear. 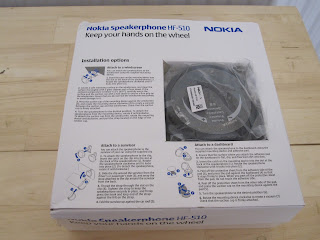 The speakerphone I received had already been fully charged and I haven't recharged it even once even though I have been using it well over a week now. Learnt that charging the speaker's in-built battery takes around 2 hours which gives approximately 30 hours talk time and 180 hours standby time on a full charge. 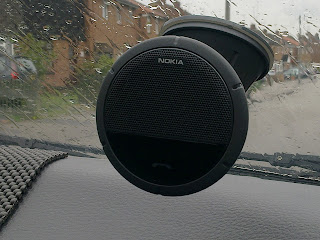 Pairing the device with the Nokia E72 via bluetooth was pretty straight forward. I had to select the speakerphone from the list of devices on the mobile, entered the passcode 0000 and the pairing was complete.

You can check the list of all the compatible Nokia handsets here. It's compatible with other mobile makes as well, including my old Sony-Ericsson K770i and 3 Skypephone.

The HF-150 comes with three mounts and I used the the suction cup to mount to the windscreen and it didn't fall off even once. I tried using it with my Dash genie dashboard holder but that was not such a good idea - it fell off a couple of times while driving.

Due to the DSP (Digital signal Processing) noise-cancellation technology, voices were surprisingly clear and sharp. Accepting and ending calls was a breeze - by pressing the front display panel which also acts as a button.

The volume was quite loud but adjusting it was really easy and convenient - turning the dial on the edge of the speaker, left to lower and right to increase the volume. I really like the fact that you could see the incoming caller ID on the integrated display - so you can decide whether to accept any of the calls. Not that I rejected any.

I liked the ability to copy and access your contacts on the integrated display without twiddling with the phone. However, the feature I really loved was the voice dialling feature. Only tried it today and it works really well. All I had to do was press the front panel for about 2 seconds and you get the voice dialling symbol. Just say the name (or nick name) of the contact and it dials automatically.

There were no negatives. The only thing was that I had to remove it whenever I had to leave my car parked for an extended period of time, for fear that someone might break into the car thinking that the speaker phone was a sat-nav. I might be a bit paranoid but you can never be too careful.

The HF-510 is not listed for sale on the Nokia online shop but it's available in various online stores and the cheapest was £59.93 at Handtec.

With some places banning hands-free headsets and others considering it, the HF-510 is definitely a good buy if you wanted to remain in touch on the roads. I could really get used to this speaker phone and was quite sad that I have to give it back. It's will be hard to go back to using my old hands-free headset.

Thanks to WOMWorld/Nokia for letting me try out the  HF-510.
Email Post
Labels: gadgets mobile