I recently received a free sample of a car phone holder to review. It's called the Dash Genie and is said to be the World’s first suction-mounted dashboard car phone holder. 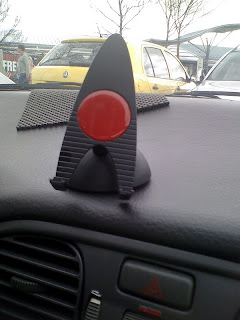 To mount the Dash Genie to my car dashboard, I had to take out the protective covering on both the red face as well as the suction cup. I am not sure what material they are made of but it is really sticky.

A flick of the suction lever and the cradle was stuck really hard. Tried pulling it out but I was wary of the warning on the cover which says that "...demounting the dashboard as forced detachment can cause serious damage." I couldn't believe it but it held my phone firmly in place all the way from Coventry to London. However, I was thinking to myself that the cradle would be useless once the material lost it's adhesion quality. True enough after a few days there was a reduction in the stickiness. 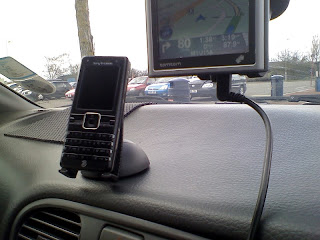 I found out that all I had to do was clean the pads with plain water and it becomes sticky again.

The cradle is made in South Korea and is available exclusively on the Mobile Fun site for £14.99. There are loads of other car phone holders on their site.
Email Post
Labels: gadgets mobile

Unknown said…
so what's your verdict on this product? when you applied water on a clean cloth, did it went back to its original stickiness? i am planning to buy one but it gave a second thought when i've read one comment that says you'll pick your phone most of the time on the floor because the sticky part looses its stickiness in a few days. hope to hear from you soon. thanks in advance.
11:54 pm, January 03, 2011

Dilip Mutum said…
It's great. I am still using it. You have to wipe it using water every few days as it tend to pick up other stuff as well and loses the stickiness. Wiping with water restores the stickiness.
8:01 am, January 04, 2011