To be an integral part of the digital world, communication should be fast and convenient. Even though you might not travel much, but it feels like places on the other side of the World is just a click away. The World is definitely becoming smaller and it's all mainly due to two reasons - advances in computing and communication. Computers are shrinking in size every day, while their performance keeps on increasing. The UK is now in a race with the Asian giants, namely Japan and Korea, to digitalize media. However, these Asian countries have so far outpaced the UK in this regards - they have been using digital text books for years, while paper books still rule here.

Gadgets like the palm top and tablet PC’s didn't sell that well despite all the publicity mainly due to limitations, namely, internet speeds and distribution. But it's slowly changing - today cable broadband in the UK are reaching speeds of up to 50Mbps. Mobile broadband speeds are increasing as well - upto 14.4Mbps. That doesn't sound that impressive unless you compare it to the speeds just a couple of years back. And it's just the start - upgrades of the existing 3G networks to 4G is expected to increase mobile broadband speeds up to 100Mbps.

I guess this is just the right time for a complete transformation and may be the reason why Apple is launching the 3G version of the iPad, following successful launches of the Mac PC, Mac Books, the iPod and the iPhone. I am eagerly looking forward to the launch here in the UK in March. 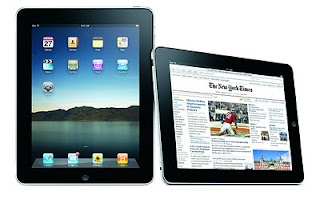 Looking at the various reviews on the web, I was surprised to see so many people criticising the product. A lot of people dismiss it as an oversized iPhone. So far I have read less than five positive reviews about the iPad.

Anyway, the Apple iPad is the slimmest multi-touch screen device around (9.56" X 7.47")- a communication and entertainment device designed for convenience and mobility. It will come preloaded with the Safari browser, email client, photo app, video player, Youtube app, iTune and Google map among others. And that's not all - users can download upto 140000 apps from the App Store.

It is powered by a lithium-polymer battery which can last upto 10 hours and comes with a choice of 16, 32 or 64GB internal memory. With Wi-Fi, Bluetooth connectivity, the iPad can also take a 3G SIM card and access the internet at a speed of 7.2Mbps(which is the maximum speed of mobile broadband in UK at present). It has an amazing high resolution LED-backlit IPS 9.7” display.

Prices have not been announced as yet, but the 3G iPad will definitely be on the expensive side (as if that has deterred Apple fans in the past). Looking forward to getting my hands on one soon. I believe that ideally it will be best suited for business people, frequent travellers and those want to have internet access always on. Even though the device can be used as a normal reader, the popularity of the iPad will depend on the connectivity - the 3G features and support for various applications similar to the iPhone.
Email Post
Labels: apple gadgets info

Faith | MyPostcardPrinting.com said…
So this is what they call the Apple tablet. No wonder they call it tablet because it looks like one. How much does one cost?
3:12 pm, February 04, 2010

Make Money Online Free said…
I don't think the iPad is all that interesting.

I personally own an iPod Touch right now and the iPad doesn't interest me a bit more..

I have no intention of purchasing one and I believe anything the iPad can do, so can my touch.. so why waste money?

Just my opinion though.