It's been sometime since I reviewed my 3 Skypephone and number of my friends have bought the phone based on my recommendations. Most of them are happy with the phone. On the other hand, some guys have accused me of not highlighting some of the limitations or weaknesses of the phone.

First of all, let me start of by saying that I never claimed that this phone is the best or the most advanced in the market. You can't compare it with the Apple iPhone. However, I have to admit that I neglected to point out some of the drawbacks of the phone.

There are some things I don't like about the 3 Skypephone:

1. First of all the screen - it's shiny and nice but it is near impossible to read or see anything in bright sunlight.
2. The camera does not have a flash and gives terrible results in bad light conditions.
3. The back cover is held in place by some short of magnet and it has a bad habit of getting left behind in my tight jeans pocket when I take the phone out.
4. The phone does not allows Skype in or Skype out. However, this might change soon according to 3 Mobile Buzz.

Having said that, the 3 Skypephone is not bad. It is among the most feature packed for it's price range. Yes! It's a cheap phone and I save loads of money calling my wife who also has one by using Skype.

I take loads of pictures with it all the time and most come out really well in bright conditions. I also use it as an alarm to wake myself up everyday. It has really come in handy when my internet line goes down or I am at a place without any internet connection as they an be used as a modem.

Rosman and Elayne who has just arrived in Coventry recently bought the new 3 Skypephone S2 after reading my blog. They are newbies and I helped them set up Skype accounts. The phone is slightly heavier and feels more solid. However, I didn't any significant change from the old Skypephone apart from the cosmetic ones. 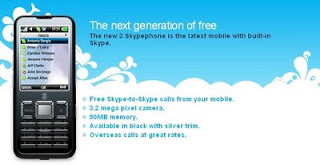 I was slightly confused as the Skype website mentions that we can call "any landline or mobile abroad from your 3 mobile" but I did not notice Skypeout installed.

Anyway the phone now has a higher resolution camera (3.2 Megapixel). I like their new navigation system where you can scroll around a carousel of icons which reminds me of the Mac OS. The phone comes with a larger memory - 50MB expandable to 4GB (microSD) as compared to 16MB on the old phone. Besides Skype, the new Skypephone also has Windows Live Messenger, Facebook and RSS reader preinstalled.

The camera still lacks a flash and autofocus (another disappointment). However, for the price (£69.99 for pay-as-you-go) I definitely recommend this phone.

NOTE: The phone is available in the UK only for the moment.
Email Post
Labels: gadgets mobile review