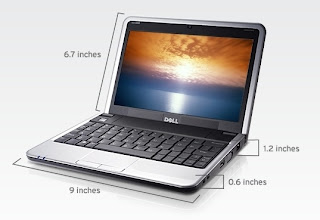 Following the success of the Asus Eee , other PC manufacturers have released their own versions of mini PCs. This includes Fujitsu with their Amilo Mini and now Dell.

Dell officially unveiled the new Inspiron Mini on the 4th of this month and is now available in the UK, Ireland, France, Germany and Austria.

It weighs just 1.035kg and has a bright 8.9-inch glossy LED display (1024x600). Wi-Fi is standard. Other customisations include Built-in Webcam and Bluetooth.

It runs on Microsoft Windows XP and prices start at £299/ including VAT and delivery.

Dell promises to bring other models running Ubuntu 8.04 and a custom interface developed by Dell in the following weeks with a lower prices starting at £269 including VAT and delivery.
Email Post
Labels: gadgets launch pc

SuperBlogger said…
I see one HP mini laptop in Three (3) mobile phone shop in Coventry few days ago. I think it is great to have such a smaller technology. However, I think the capabilities should not be made lower then expected or should I say should be in line with latest technology. I noticed that the HD space and RAM is much smaller which will led to lack of storage space and reduction in speed especially when multiple applications and internet connections are in use. Just my 2 cents.

Dilip Mutum said…
Thanks for your comment Ahrasis. AS opposed to desktop replacement laptops, I think these are meant for people who want a computer on the go just to check emails and edit some documents and not heavy computing work.
11:27 pm, September 12, 2008

SuperBlogger said…
Hmmm... I wonder which one is the best. If mini laptop is just for emailing etc... I prefer PDA like TYTNT II for example. It is nicer. I've heard it it is much faster for internet access and have a capability of mini laptop as well. The speed can go up to 1.5mps. With windows mobile environment and capability to add up desired application like TomTom navigator, ofice applications etc. Yes, I would prefer a PDA then mini laptop for the same price ;)
11:46 pm, September 12, 2008

Dilip Mutum said…
That's true. However, if you wanted to edit or create documents, mini laptops would definitely be more comfortable and efficient than PDAs.
12:31 am, September 13, 2008