Ubuntu up and running

As some of you might be aware, my previous attempt to load up Ubuntu on my old computer ended in failure - read Ubuntu installation problems.

After that I discovered that the problem might be with my Maxtor hard disc, which was not being recognised at all. I was about to assign it to the rubbish bin when my tech expert friend Wolfgang asked me whether he could have a look at it first.

To cut a long story short, he found that the hard disc was in a mess and reformatted everything. Yesterday night, I put it in, reconnected all the cables, said a short prayer and started up the computer. Loaded up the Ubuntu CD and started installing it.

I would be lying if I said that I was not worried. Unlike a Windows installation, where you get a slide show telling you how Windows was going to make your life easier, here I got lines of code running down my screen before it finally got a graphics interface. It took ages to load after I hit the install icon and I even dozed off on my chair during the installation process.

Finally the installation was complete and after restarting the computer and removing the CD, I had a brief scare when the lines of code reappeared and started running down the screen. But in the everything was OK. Ubuntu comes with several applications preloaded - including the Firefox browser, GIMP, Open office, etc. There were several games as well.

Here's how my desktop looks: 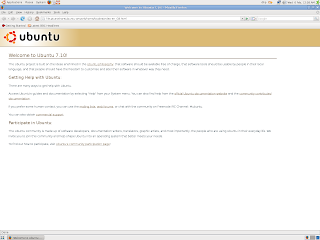 Anonymous said…
I hope your experience with Ubuntu goes well. I hear a lot of good things about Ubuntu. Their are also many other Linux distributions out their I have played with Mandriva and Xandros and Red Hat. Their is a bit of a learning curve associated with linux. But their are a lot of information resources available their is even a linux search engine. Check this out:
Linux Search Site
10:03 pm, January 15, 2009